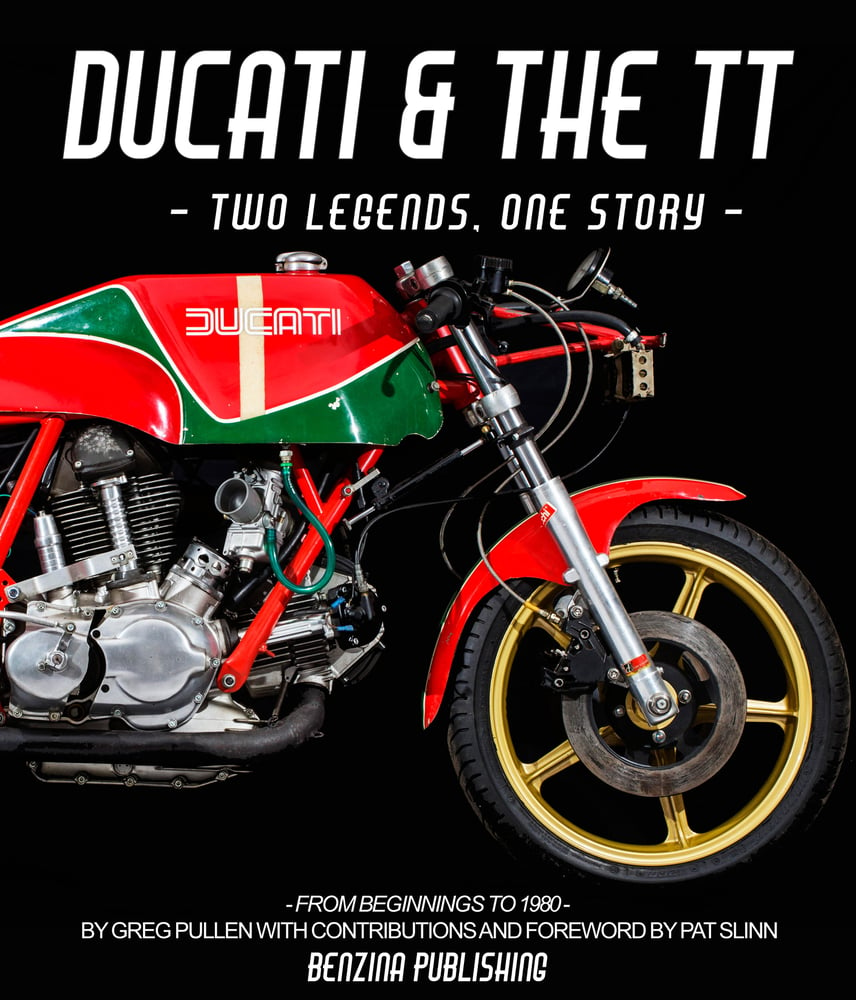 Ducati and the Isle of Man TT; two legends certainly, but one story? Yet consider that back in the mid 1970s both Ducati and the TT were thought by many to be living on past glories and unable to survive the rise of the Japanese motorcycle industry and the new found glamour of Grand Prix racing. Despite this Ducati and the TT persevered and, despite both almost disappearing, started growing again largely thanks to the effort of a team convinced that they could win a TT with a Ducati.

This is a glorious Limited Edition, large format hardback (240 pages, 280mm x 240mm / 11"x9.25") with many previously unseen and specially commissioned photographs, plus many by renowned photographer Phil Aynsley. Interviews with Steve Wynne and members of his team, together with others who raced or were involved with Ducati and the TT bring many untold stories to life.

This historic reference starts with the surprising facts that the first Isle of Man TT races were for cars, and that Ducati had been in business for over 20 years before they built their first motorcycle. Yet now they are both inextricably associated with motorcycle racing and have built histories that regularly crossed paths, bringing five World Championships to Ducati. This, then, is the history of both these wonderful icons of motorcycling and how their worlds collided. It also tells in full for the first time how Mike Hailwood returned to motorcycle racing in Australia before attempting his TT comeback, along with new insights into the motorcycles he raced and the people he inspired.

The book then builds to a tell of a time when almost nobody, bar a few good men led by Steve Wynne, believed Ducati could rise to the pinnacle of motorsport back in the mid 1970s. The glorious achievements of the Sports Motorcycle team and Mike Hailwood in 1978, and their subsequent frustrating attempt to regain that glory, are the climax of this book that brings fresh perspective and insight into a tale many think they know, despite few appreciating the fascinating truth..

Finally there is a "where are they now" appendix, telling where what happened to the most important bikes and riders, along with a table of Ducati's achievements at the TT.

You can see sample pages by clicking here

SORRY - I KNOW THE CHECKOUT CAN BE CONFUSING! To buy click red "add to cart" on the right, then click on "cart" at the top left of the page (below Benzina logo) and it will take you to checkout. Thank you

Fed up with the pittance paid by mainstream publishers (because retailers race to the bottom price on Amazon) I’m self publishing this one (although the money involved would buy a very nice bike), so although it’s pricey I think the quality, originality, design and size make it worth it. And at least I can promise you won’t buy it more cheaply elsewhere

The book's author Greg Pullen began a lifelong love affair with motorcycles in the sports moped and Barry Sheene era, growing up in rural Wiltshire during the long, hot summers of the 1970s. An obsession with motorcycles and Italian food soon led to a Ducati obsession that has included owning far too many to admit to his wife.

Trained as a chartered surveyor specialising in old buildings, these days Greg still lives in Wiltshire, riding and writing for magazines that have included Classic Bike, Classic Bike Guide and his own publication, Benzina. He is also the author of books for the Crowood Pres on Ducati Desmodue, Moto Guzzi and Honda V4s.

Contributor Pat Slinn, like his father before him, trained at BSA and worked in their experimental department. An accomplished off road rider he competed in many International Six Day Trials on self built motorcycles, even competing against Steve McQueen.
Pat eventually moved to Ducati, culminating in being part of Mike Hailwood’s 1978 and ’79 TTs and working with Tony Rutter to bring Ducati three Formula Two World Championships. He still punctuates retirement in rural Cheshire with regular visits to motorcycle events including annual pilgrimages to the Isle of Man where he renews friendships with many of motorcycling’s racing legends.